Archive for the tag “credit cards”

26) The American Dream is a Prison Cell

Growing up, I was under the illusion that my father was good with money and was conscientious about his investments and what he chose to buy. I learned later on that my father’s motivation was entirely based on my mother’s hormones. He would do anything to assure that she stayed with him, even moving our family when we were better off, financially speaking, to stay and pay off the home we lived in. All of this was hidden from my view; yet, I continued to think that he was making sound choices all along.

As I began attending college, I had to take out student loans, like the majority of other middle class students who were lucky enough to attend college. My primary motivation was that I had to pick something that would land me a job. Survival and independence was the ultimate goal. I often wondered why society calls it education, when the reality is to get a job and serve a life prison of work for pay to consume.

I first majored in Business. Like many young people, I was swayed by the idea that knowing business will be a guarantee to get a job and thus achieve success. As I spent the first year of college in business courses, a great anxiety slithered along the edges of my perception like worms in moist earth.

I didn’t like what I was doing or learning. The language was empty, calculating, devoid of the natural world. Dressing up, making appearances, walking the walk, talking the talk, my soul plunged into the void. Oxygen escaped through my pores every time I opened the doors of the creaking building.

The light disappeared into the polished floors of the hall; every classroom was filled with the templates of PowerPoint presentations, Excel spreadsheets, and cut and paste Word memos with cheesy clipart I had seen on thousands of student flyers stapled onto billboards. Being ‘creative’ was equated with changing the color scheme and typography on your spreadsheet.

Everyone dressed in smart suits and shiny, black shoes clicking as they walked, like the sound of register tape pounding out numbers and dollar signs. Some days, I would stroll down those halls, feeling sick, observing my fellow students regurgitate business principles and economic trends mimicking their pale faced heroes on the trading floor of Wall Street, going blind staring at an endless stream of financial tickers.

About this time, I saw the film, The Matrix. There was no color to this world, no life in it. After taking a marketing class, I realized that my DNA was fundamentally opposed to everything I was being taught. A storm passed over me, a kind of existential crisis. I tried desperately to study for tests. I was a poor test-taker to begin with. Give me an essay question and I can explain everything. Our tests consisted of multiple choice and true or false questions, just like all of the CTBS tests I took in grade school with many rows of dots on Scantrons.

I was never any good at them. I overthought my answers and had difficulty with the process of elimination. Elimination is waste and in my world, everything must be considered before being discarded. My Business Law professor told me I think too much. I was completely depressed. What can I do in this world that has meaning and real satisfaction? I can’t buck up to make this work without going absolutely mad or becoming a sociopathic asshole.

My roommate, Tracy, was also a Business major. I came home to our apartment in tears. After several cigarettes and a few beers, she pulled out the course catalog and showed me a major I had never heard of.

“I was thinking… you are really creative. Why don’t you see about getting into the Graphic Design program?” she said. “It’s still business oriented because you work in marketing and advertising, but you design logos and other stuff.”

I took one look at the catalog and knew that’s what I wanted to learn. I needed creativity. I needed more than black numbers on white paper. I needed color and hues and tints; I yearned for new ideas, research, strange juxtapositions and conceptual exploration.

Three years later, I was in my junior year in Graphic Arts taking a class on Ethics in Design. Once again, I found myself in a panic, questioning how I would make a living in this field and I began to worry. Even though I reclaimed my soul in the creative element, would I be chained to the whims of business interests, would the color of my world dissolve into oblivion with the incessant needs of my clients to sell things I didn’t believe in?

After all, I would have to engage clients whose bottom lines were engrained in their business plans and the bottom line is all anyone can focus on. Was I willing to sacrifice my creative energy to see it produce another useless consumer product, more waste, more of the same? Was I willing to use my design skills to manipulate the public in ways that inherently were wrong and completely unsustainable?

The answer was – No.

After graduation, I took a retail job as a temporary solution with the hope of planning my next career step. After a year, I signed up for a 401(k) and contributed more than was recommended, having educated myself on money and trying to save more than I spend, once again knowing the future was uncertain and I had to pay my student loans. I subscribed to Money magazine and drew up a spreadsheet, keeping track of my expenses and re-balancing my portfolio every year. I did this for five years, careful to plan everything out, how much I would save and keeping my interest income figures low, just in case. That all changed…

I was clearly the wrong demographic for Money magazine, so I let the subscription lapse. Money magazine was for people who had $5,000 to invest, a mortgage, a kid or two in college, and a nest egg of at least $100,000. Nothing in the articles represented anything I was going through.

Four years later and an economic upheaval in 2008, I began to focus less on money, and yet, I saved it because I needed to sustain myself even though I knew the system was absolutely screwed. I began to downsize my living to the bare essentials. I stopped servicing my car and driving only when I absolutely needed to. I became more reliant on my computer for communication than my phone.

Now, my lifestyle is still at bare minimum. I have enough money for my creature comforts; coffee, cheap wine and $1 books at the library bookstore. I pay for a phone I hardly use and pay off my credit card each month. Debt is my enemy; a prison cell and I’d rather just go without, not see my friends, not drive anywhere. I write every day, I read every day and I hope every day for a revolution of consciousness.

I was 22, working as a cashier at a gas station in the Inland Empire. The sun blazed down at an angle. The heat made wavy lines like dancing snakes across the parking lot. Shielding their eyes, customers walked into the Mini Mart to buy something cold to drink. It was cool inside the air-conditioned cashier stand. 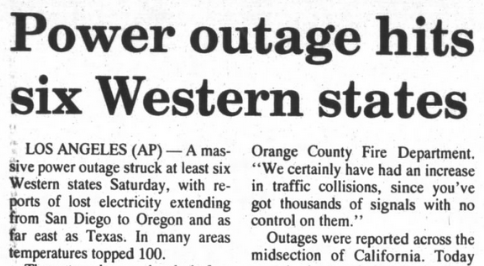 At 4pm, the power went out and busted out the satellite that powered our card readers at the gas pumps. Customers had to pay inside. The register could only do cash transactions. Within 10 minutes, we had a line of customers out the door for 50 feet. I pulled out the old-fashioned carbon copy machine, the one you have to slide the arm over the top of a credit card. Of course, everyone was using credit cards and it took longer for each transaction. The owner of the gas station came out of his office and tried to take over the register, glancing nervously at the growing line. He kept making mistakes.

He started packing ice in coolers and transporting the perishables to his office. The phone was ringing off the hook. On my break, I answered the phone while the mechanic assisted the other cashier at the register. A frantic woman on the phone wanted to know if ATM machines run off of electricity.

The moment hovered like a hummingbird in my mind. I watched the people pulling out their credit cards, fear in their eyes, creases in their faces. This must have been what the 1974 gas shortage looked like. It was getting hot in the cashier stand. Nothing was working. I was told that the back-up generators for the grocery stores weren’t working either. The entire west coast up to Canada was out of power.

The sun lowered in the sky, casting long shadows of the people standing in line. It was only going to get worse. I’m never having kids.