I was in 7th grade in 1987. As a middle-class white kid living in the San Bernardino Mountains, our school was mostly safe. One afternoon, I recall two girls fighting in front of my locker, pulling hair and scratching each other. I had to get my books for my next class, so I told them to knock it off and yelled for a teacher. There was never a thought in my mind that one of them might pull out a gun.

Bullying was a problem in 8th grade. A girl in my English class threatened to kick my butt over a boy I would talk to in class. She told all of her friends and before I knew it, I had kids telling me that she was coming after me and I should prepare myself. I was terrified. I told my mother that I was afraid to go to school. I dropped out and enrolled in a home school program.

We moved to the city when I was 15 and I enrolled at a three-year high school. Socially, I adjusted well to my new school, larger and more diverse than in my mountain hometown. Violence was always at the edges of my world, but our campus was open and we didn’t have armed security guards at entrances with metal detectors.

It was the late 1980s and pop culture gave us punchy, satirical references to school violence and teen suicide. Julie Brown’s music video, “The Homecoming Queen’s Gotta Gun” made the MTV rounds in 1987 in classic 80s fashion. 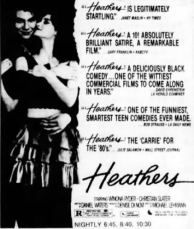 Released in 1989, Heathers was a psychotic fantasy crossing over into a grim reality. Dubbed by the media as, “the ‘Carrie’ of the 80s,” Heathers probed the dark interior of teen angst and the many layers of contemporary suburban high school life.

Veronica, played by Winona Ryder, tries to resolve herself between the sinister world of the three Heathers, the most popular girls in school, and Veronica’s anarchist lover, J.D. (Christian Slater).

Slater’s character takes on an eerie foreshadowing to Eric Harris, one of the two boys responsible for the Columbine tragedy. Veronica’s character is desperate to seek justice in a world gone wrong, but feels the pressure to perform with the popular girls. 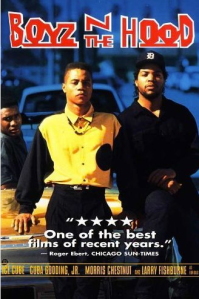 In 1991, the controversial film, Boyz N The Hood, was released. John Singleton, the film’s 23-year-old director, responded to accusations that his film prompted violence in several theaters around the country, “I didn’t create the conditions under which people shoot each other… This happens because there’s a whole generation of people who are disenfranchised.”

It was one of the first movies to show the plight of African-American kids growing up in the South Central Los Angeles, experiencing violence in school and on the street, every day. Cuba Gooding Jr.’s character, Tre Styles, reminded me of Veronica – both trapped in a cultural prison trying to find higher ground, to overcome the reality of powerful cliques, raging bullets, broken families and indifferent or absent parents.

Where Heathers was a morbid satire; Boyz N The Hood was stone cold reality. Veronica and Tre face an existential conflict, desperate to separate from the status quo, both revolting against a sociopathic, senseless existence.

From Boyz N The Hood, I learned that America’s black youth are completely neglected and left to fend for themselves. From Heathers, the message was clear: dethrone ineffective, exploitive leadership and stand up for those who are left behind.

Your contributions are welcome! Cancel reply