I was in my sophomore year in high school in 1990. We had an open campus back then. At lunch, hundreds of starving teens descended upon the fast food establishments of the land like caged chickens, pumped full of hormones and suddenly set free.

The unbridled rage of rabid teenagers instilled terror deep in the bones of every underpaid college student working at drive-thru windows within a 10-mile radius. Panic materialized as the scream of hundreds of rubber tires chaffed against asphalt, like a thousand growling hydrogen bombs.

We piled into convulsive, exhaust-spewing vessels, stereos blaring an angry bile of anarchy and destruction: mini trucks vibrating base from wolfers giving nearby earthworms an erection so intense their heads implode like cherry blossoms in April, the pavement blisters in the sun, sports cars without mufflers set off car alarms and dogs’ ears bleed in backyards where pretty rhododendrons wilt all over the Inland Empire.

This hearkening of affluence summoned the lunch-hour, sending chills down the spines of every doomed restaurant manager, the whites of his eyes reflected against the name badges of his cooks hurriedly preparing to satisfy the beasts at their door – my friends.

My small, insignificant tribe of 20 nihilistic Goth-types piled into our own belligerent vessel: a white Toyota pick-up, blaring the flamboyant verbiage of Oingo Boingo’s Only A Lad out of the cab windows, open wide for maximum effect through the smog-filled particles that lodged inside our ears as our asses slammed against the truck bed going over potholes and railroad tracks to seek out large slices of pizza, luxuriously drizzled with ranch dressing poured to capacity on paper plates.

For 45 minutes, we were free: free to roam, free from indifferent parental units, free to inhale the corporate seduction of Camel cigarettes, free to make out and then, like reluctant slaves, we were forced back to the hive, wheels screeching, circling the parking lot to find an open space and finish off our last two classes for the day.

And then, I got my own car… Counter to all that I was supposed to do, my car took possession of my soul and drove me to imaginary places: silent mansions, dark places, crumbling architecture, antique leaning willow trees. The bamboo whispered stories to the wind and I listened and walked and walked, seduced by the ghosts of pungent orange groves and time disappeared among the smells and sounds of the orchard. I walked the trails that wandered in secret pathways throughout the Kimberly Crest Mansion, one of the oldest buildings near our high school. 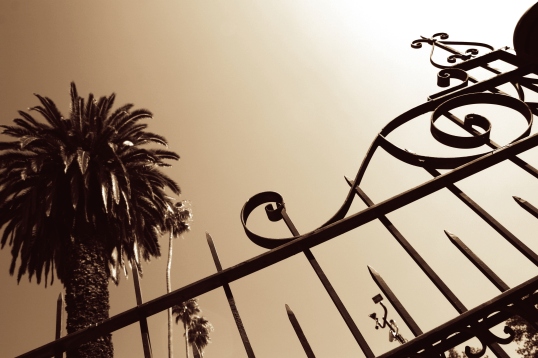 Then, as if my manual stick changed to automatic, my 1966 Volkswagen Beetle drove along, running parallel to an old cemetery with tall cypress trees and then on up to a place called The Point. It was here that I had a bird’s eye view of the universe; it was a haven for solitude and reflection. It was a place where a troubled teen could experience suicide without actually doing it. It was the ideal space where I learned to think, to feel, to reflect  – all of which are necessary in a world full of complexity.

It took another year to get my HS diploma. I learned on my own, to think for myself in a world of contradictory claims and incentives that don’t make basic sense. I learned to look on a level above the tree line, to watch, listen and absorb all the moments in my life and in high school. I found that everything I ever needed to learn was inside as long as I took the time to listen… on top of a hill… in silence.

Your contributions are welcome! Cancel reply