Gen X is the first generation for whom the global reach of technology began to allow a significant number of individuals to share experiences across national boundaries in many (but by no means all) parts of the world.
– Tammy Erickson, Harvard Businesss Review

AGE
Born between 1961-1981, culturally as well as demographically.

PARENTS
The majority of Generation X was born of the Silent Generation born between 1925-1945.

LATCH KEY KIDS
This generation was referred to as the first latch key kids. Unlike other generations, Often, Gen X children were home alone after school as both parents were working.

VOLUNTEERS
Gen X is the most philanthropic and volunteer-driven, close to 30% each year between 2009-2011 compared with other generations according to the Corporation for National and Community Services.

BIRTH CONTROL
Gen X is the first generation born and raised during the introduction of the birth control pill and the legalization of abortion.

INDEPENDENT
Due to high divorce rates of the parent’s of Generation X and being home alone, Generation X has adapted a level of independence that sets them apart from other generations.

This generation has watched more TV and as a result has probably witnessed more violence and murders than any generation in history. In addition, X’ers’ gloomy view of the world has been shaped by such numerous negative events as the Persian Gulf War, escalating crime, riots, AIDS, the nuclear threat, and pollution.
– International City-County Management Association, MSU 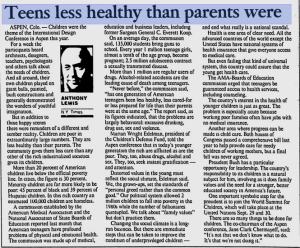 “Never before has one generation of American teenagers been less healthy, less cared for, or less prepared for life than their parents were at the same age.”
– National Commission, The Spokesman Review

Some resent the baby boomers in a big way. They feel that the boomers spent too much time partying and messing up the world that X’ers have inherited. Now, the X’ers have to fix it, and they see the boomers as standing in their way. This view has made them highly cynical. – International City-County Management Association, MSU